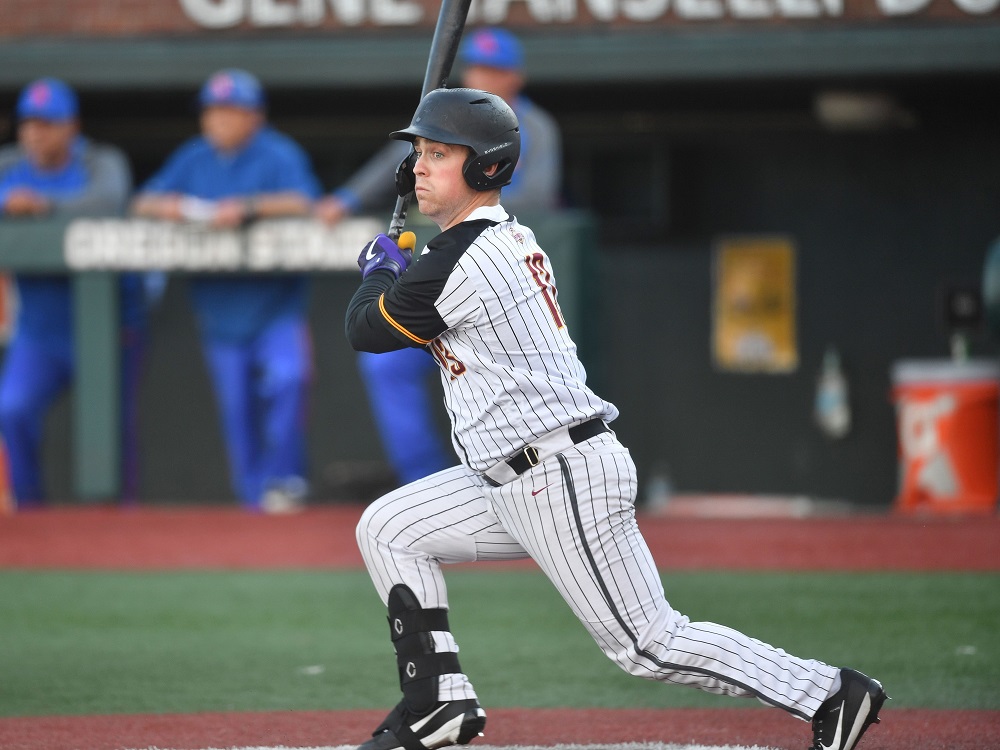 Sunday, July 17, Wenatchee, Wash. – Briley Knight (pictured, above) had three hits and four RBIs and Corvallis claimed the rubber game of a hard-fought series at Wenatchee with an 8-4, 12-inning triumph at Paul Thomas Sr. Field.

The Knights (23-13 all, 23-12 WCL, 5-4 second half) exploded for five runs in the top of the 12th inning to break the game open. All three games of the series were close; Corvallis won 7-5 in 10 innings on Friday and Wenatchee posted a 5-4 walkoff win on Saturday night.

Temo Becerra (Stanford) opened the decisive 12th with a single and reached third on a balk and a wild pitch. Zander Darby (UCSB) then ripped a double, driving in the go-ahead run.

Two walks loaded the bases for Knight (Portland), who drove in a pair with a single to make it 6-3. Jonah Advincula (Redlands) and Mason Le (CSU Northridge) tacked on with RBI singles to complete the rally.

Chase Reynolds (Pacific U), the Knights’ fourth pitcher, retired the AppleSox in the home 12th to end the game for his first victory of the summer. He went the final three innings, allowing one hit and one run while facing just one batter over the three-inning minimum.

An RBI double by Brady Lavoie (San Diego State) in the first sent the Knights up 1-0. Wenatchee scored twice in the second to take a 2-1 lead, but Knight’s two-run homer, his first of the summer, sent Corvallis back on top 3-2 in the third.

Wenatchee tied the game in the sixth, and neither team could score until the 12th. Reynolds and reliever Sean Wiese held the AppleSox to three hits and one meaningless 12th-inning run over the final 5.2 innings.

Advincula had two hits and an RBI. Tyler Quinn (Pacific U) doubled and scored. Starter Joey Gartrell (Portland) went four innings, did not allow an earned run and had two strikeouts.

The Knights conclude the 10-day road trip with a 2:05 pm makeup game at Portland on Monday. Their next home series is Tuesday, Wednesday and Thursday against Cowlitz; all three games start at 6:35 pm.