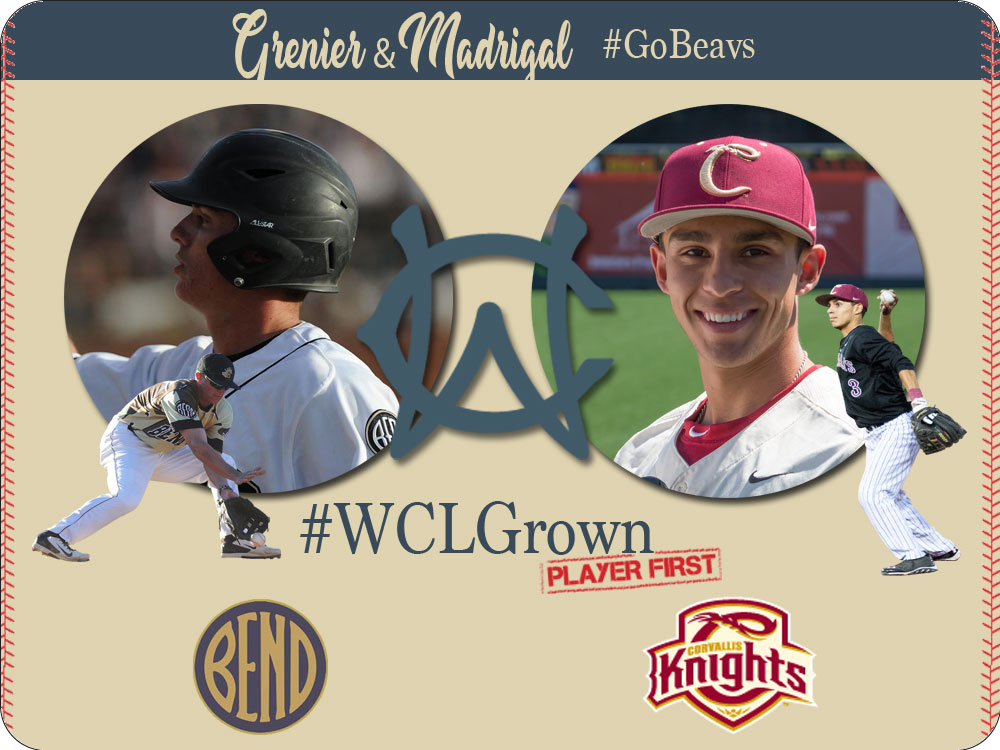 Corvallis, Ore., Monday, May 3 – Since 1967, not a single school north of the 40th Parallel has won a College World Series title with one exception, a public land-grant university from the Pacific Northwest located in Corvallis, Oregon.

We’re talking the Oregon State Beavers of the Pac-12, the Conference of Champions.

How OSU captured its third National Championship, arguably its most impressive title team featuring four future first-round MLB picks, has origins not only in the school’s hometown, but also in the Beaver State’s playground, Bend, Oregon.

Because that’s where future OSU stars Nick Madrigal and Cadyn Grenier got their first taste of college baseball, with the Corvallis Knights and Bend Elks, respectively, of the West Coast League, the premier summer collegiate baseball league in western North America.

At the time, it was a long shot that either player would make it to Corvallis or Bend. There was hope, but it was not probable as both were highly coveted by MLB clubs and were expected to get drafted high and sign.

Then OSU assistant coach Pat Bailey worked diligently to set things up for Nick in Corvallis and Cadyn in Bend. He felt like if they got to Corvallis and Bend there was a better shot that both hot-shot shortstops would play some ball and ultimately decide to forego the pros to go to school. But realistically, the Knights, the Elks and OSU Baseball figured both would sign and start their professional careers sooner than later.

As the summer season got closer both the Knights and Elks were not really counting on Nick or Cadyn to show. The two longtime rivals opened the 2015 WCL season playing each other in Bend June 5-7.

The MLB Draft that year was set for June 8-10. Considering the draft’s timing and that both kids were wrapping their senior years of high school, it was not shocking whatsoever that Nick and Cadyn missed that first series at Vince Genna Stadium.

What was surprising was what happened next; Grenier was selected in the 21st round of the MLB Draft by St. Louis and Madrigal in the 17th round by Cleveland.

All of a sudden there was a little more hope as both players were drafted much later than expected. Was school now in their future?

That was to be determined, but what was apparent was that both players were itching to get on the field and test out their skills versus college players.

Nick Madrigal was so motivated that the Sacramento area native booked a last-minute flight that got him to Goss Stadium one day after the conclusion of the draft. He rushed from the airport to Corvallis arriving at the clubhouse less than 30 minutes before game time. Nick hurriedly dressed and Knights head coach Brooke Knight excitedly revised his lineup so that Madrigal could start that night; hitting second and playing shortstop.

In his first game with the Knights on Thursday, June 11, he went 3-for-5 with two doubles, two runs scored and a stolen base versus the always tough Bellingham Bells. It was an epic entrance let alone debut for the prodigy from Elk Grove High School in California.

“When Nick arrived, I was gob-smacked by his elite knowledge of the game and his self-confidence. From day one, it was like having another coach on the field. He sees things many do not see, he changes the outcomes of games. To achieve what he has in our sport, and with such humility, I could not be happier for Mad. Proud to say he was a Knight,” said Corvallis Knights longtime skipper Brooke Knight.

Nicky two strikes, as he is known today as the starting second baseman for the Chicago White Sox, just wanted to get on the field in 2015 and Goss Stadium would be his place.

Madrigal shared his thoughts about what would be his new home in a piece written by Kevin Hampton in the Gazette-Times in June of 2015. “I think getting on the field and playing on the new field in front of the fans, it’s been awesome,” Madrigal said. “I honestly didn’t think being out here would feel as comfortable as it does. Just the whole atmosphere is pretty surreal. It’s unbelievable.”

It was the start of a magical run at what would be Madrigal’s happy place.

Meanwhile, his future Beaver teammate was making his way up to beautiful Central Oregon from his home in Las Vegas, Nevada in his supped-up sports car with license plates that read SS4LIFE. The Bishop Gorman High School grad drove up following the draft and made his Elks debut on Friday, June 12 at home versus Victoria.

Cadyn did not start, but like Madrigal he entered with a bang, collecting two hits in three at bats and scoring three runs. After pinch-hitting, Grenier made his first appearance at shortstop that night in the Elks 24-5 romp over the HarbourCats.

“Cadyn Grenier was a very special player to be around,” said Bend’s 2015 field manager Trey Watt, currently an assistant coach at University of Portland. “During my first meeting with Cadyn he made it very clear how important winning and the team’s success was to him. The most enjoyable part of being around Cadyn was his competitive fire.

“He was not only a threat at the plate, but he was an elite defender. Cadyn took pride in the little details of the games. He had relentless preparation in the fine details from bunting all the way to fielding a routine groundball.”

That season, the Elks would put a hurt on their rivals, the Knights, winning 8 of 9 regular-season games and sweeping Corvallis in the WCL Divisional Series in two games.

While Bend was clearly the better club in 2015, the competition between and hype around Nick and Cadyn was the real deal.

The interest in the two players was piqued, and there was no doubt Nick and Cadyn wanted to show not only that they belonged, but who was the best incoming OSU prospect.

“There was such incredible buzz around Nick and Cadyn that summer,” said Knights Baseball Club CEO Dan Segel. “I can’t remember when two players, especially incoming kids, drew so much attention. They were beacons for their clubs, uber competitive players and boy did they perform at a high level.”

What transpired that summer was that of baseball lore.

Both players beamed in the West Coast League, making their marks with Madrigal setting a new single season steals record and Grenier leading Bend to their very first WCL title.

For fans at Goss and Vince Genna, it was an absolute treat to watch.

Right out of high school, Madrigal was the de facto Knights field general and Grenier was clearly the Elks brightest star; Madrigal’s baseball IQ and Grenier’s swagger were off the charts. Their confidence was next level and as Beavers assistant coach Pat Bailey had hoped they were really digging this summer collegiate baseball thing.

They enjoyed it so much they blew past the signing deadline and finished the season strong, with Madrigal earning Knights MVP honors, Grenier celebrating a championship with the Elks and both being named first-team all-West Coast League.

But most importantly, the seed had been planted and nurtured to where both extraordinary ball players were now going to be Beavers. They were headed to school and would play baseball for Pat Casey and Oregon State.

“It was an honor coaching Nick and Cadyn. The confidence they had in themselves is what I admired most. It paid off in a National Championship and being picked in the first round,” said former OSU head coach Pat Casey. “I am forever grateful for them and how things played out.”

The plan worked. The Knights, Elks and West Coast League delivered. It was fertile ground, a place where Nick and Cadyn could whet their appetite for the game, play at a high level and contemplate; all while relishing the unique experiences of traveling the scenic Northwest and playing minor league like baseball before enthusiastic fans.

In a Portland Tribune piece by Kerry Eggers in June of 2015, Grenier touched on his decision and Bend experience.

“(The Cardinals) offered me a number that was very high, but a little under what I wanted,” said Grenier. “The financial part didn’t work out, and I immediately moved on.

“Being (a top) pick in the draft would have been unbelievable, but with as much fun as I’m having in Bend this summer, I can’t say I’m regretting making that decision.

“Being from Vegas, you don’t get to go kayaking and float rivers,” Cadyn said. “I’m going golfing with my host family today. It’s just totally fun, and completely different. I’m not getting to do all this if I sign a pro contract.”

Their choice was exciting for Beaver Nation. Both ballers would go on to excel in the Pac-12 and in their final collegiate season, as juniors, they led Oregon State to its third College World Series title.

Throughout their college careers, they competed, pushed each other. Ultimately, both would settle in as leaders; Cadyn at shortstop and Nick at second base.

Their decorated amateur careers would culminate with a national championship game victory over Arkansas in Omaha and at the 2018 MLB June Draft, as both players were key to the Beavs College World Series run and both were selected in the first round, with Madrigal being the fourth overall pick.

There is no doubt testing the waters in the West Coast League and then enrolling at Oregon State University paid off in spades for Madrigal and Grenier. Their decision also benefited so many others, from coaches, to teammates, to fan bases, to Pacific Northwest baseball in general.

Madrigal is now shining for the South Siders and Grenier is working towards his big league debut as a farmhand in the Baltimore Orioles organization.

And to think, their journey and the road to the 2018 College World Series title had uncanny ties to the summer of 2015, a dream season for Nick, Cadyn and the mighty Bend Elks.

The Knights, Elks and Oregon State continue to be great teammates, and make champions. The WCL crown has not left the Beaver State since Bend won their first championship in 2015 with Corvallis following that with back-to-back-to-back-to-back league titles.

Bend’s superstar staff will welcome Corvallis to Bend June 29-30, July 1 for their first rivalry series of the season. While the Elks are looking to bring back that magic of 2015, reigning WCL Coach of the Year Brooke Knight will surely have his club ready to defend its title.

Summer baseball is coming back to the Beaver State and that is a dream come true!

Grenier and Madrigal 2015 WCL Regular Season by the Numbers-