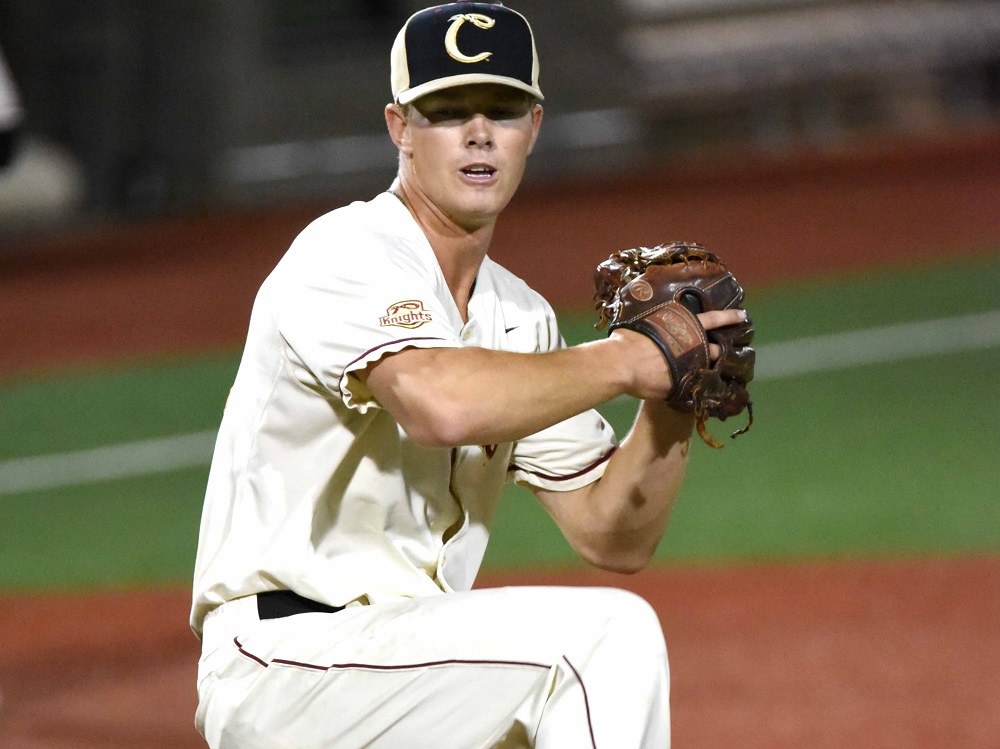 The Corvallis Knights enter the 2017 season as defending West Coast League champions with aspirations of repeating, which would be a team first. The winningest club since the WCL’s inception has won four league titles, but has never gone back-to-back.

Head coach Brooke Knight has assembled a team that he hopes not only reaches the post-season for the eleventh consecutive season, but finds a way to repeat as champs.

“We’ve built our club around pitching and defense, and it looks like we’ll be able to run a bit,” said Knight. “The WCL is super competitive so it’s going to be a dog fight to get back to the championship series, but we welcome the challenge and can’t wait to get the season started.”

The Knights open their season at Cowlitz June 2-4 and follow that with two more road series before opening up league play at Goss Stadium vs. the new Port Angeles Lefties on Wednesday, June 14.

“Our pitching depth is a strength,” said Knight. “Being stocked up with left-handers really gives us a competitive advantage and we expect both Chase and Haz to shine this summer.”

Corvallis opens up this weekend vs. the Cowlitz Black Bears at Lower Columbia’s David Story Field with three southpaws slated as its probable starters.

Lefty Cason Cunningham of Linfield, the Northwest Conference Player of the Year, gets the Knights opening day start this Friday while 2016 frosh All-American Ross Massey of Tulane goes on Saturday and junior Jordan Horak of Portland starts on Sunday.

Returning right-handers Tanner Howell of Dixie State and Cameron Richman of Portland likely will contribute as they did last year in middle relief and as set up men.

They are joined by newcomer right-handers Trevor Wells of Linn-Benton CC, Connor Redmond of Cal Poly, San Jose State commit Nick Morales and Cal Poly commit Darren Nelson. Redmond, Morales and Nelson are all candidates for spot starts and will likely be used in long relief while Wells, LBCC’s closer this past spring, is set for late-inning duty.

“We’re very pleased to have Zak back,” said Knight. “He’ll provide leadership and a middle-of-the-order bat and we’ve heard nothing but great things about Troy and Jace and expect they will be key contributors.”

The Knights are young in the infield. Returnee Matt Kelly of Portland, who led the Pilots in hitting this past spring (.292, 2 HR, 15 RBI), is the only upperclassman infielder. The junior-to-be, who started at shortstop as a sophomore at UP, is slated to play third base for Corvallis this summer.

Freshman left-handed hitter Tyler Malone of Oregon State is projected to start at second base for Corvallis while freshmen sluggers Gabe Matthews of Oregon (.282, 3 HR, 26 RBI) and Dillan Shrum of Nevada-Reno will share duties at first base. Matthews, a left-handed hitter, batted fourth for most of the season for the Ducks while right-handed hitting Shrum came on strong for the Wolfpack finishing the season hitting .317 with 2 HR, 17 RBIs and a team-leading OBP of .456.

“Our infield is young, but we like the make-up of this group and we also think they will hit,” said Knight.

Newly signed senior-to-be outfielder/pitcher Jordan Qsar of Pepperdine – an all-WCC 2017 honorable mention selection – adds experience and a left-handed bat. He hit .269 with 11 doubles, 2 homers and 24 RBIs for the Waves.

Redshirt frosh Elliot Willy of Oregon State, who played with the Bend Elks last summer, is expected to bring leadership, a good glove and some pop to the team.

The outfield is rounded out by speedster Tyler Villaroman of San Francisco and Henry Cheney of Portland. Villaroman stole 16 bases as a frosh and is a prototypical center fielder while Cheney, also a freshman, is a corner outfielder that is currently dealing with hamstring injury that will keep him out of action for the team’s first series in Cowlitz.

“We have a lot of exciting options in the outfield, and we have guys that will play good defense,” said Knight. “We have kids coming in that will compete.”

Brooke Knight, a four-time WCL Coach of the Year pick, will once again be assisted by associate head coach Connor Lambert of University of Utah. Lambert returns for his 8th season with the team. Youngjin Yoon returns for a second summer as an assistant, his first season in a full-time capacity, and recently added assistant Alex Bailey rounds out the coaching staff.

“We are in a good position to make a run at this,” concluded Knight. “We have seasoned coaching staff in place, and several returning players on the squad. I think that will help us come together like we want considering this year’s team is much younger than past clubs.”

“Let’s get this thing started.”

Note: Stats in parens are for the player’s spring 2017 season.

Follow the Yellow Brick Road to check out our 2019 entertainment schedule. It features our…

Before the Corvallis Knights start thinking dynasty, and extending their WCL title run to four…