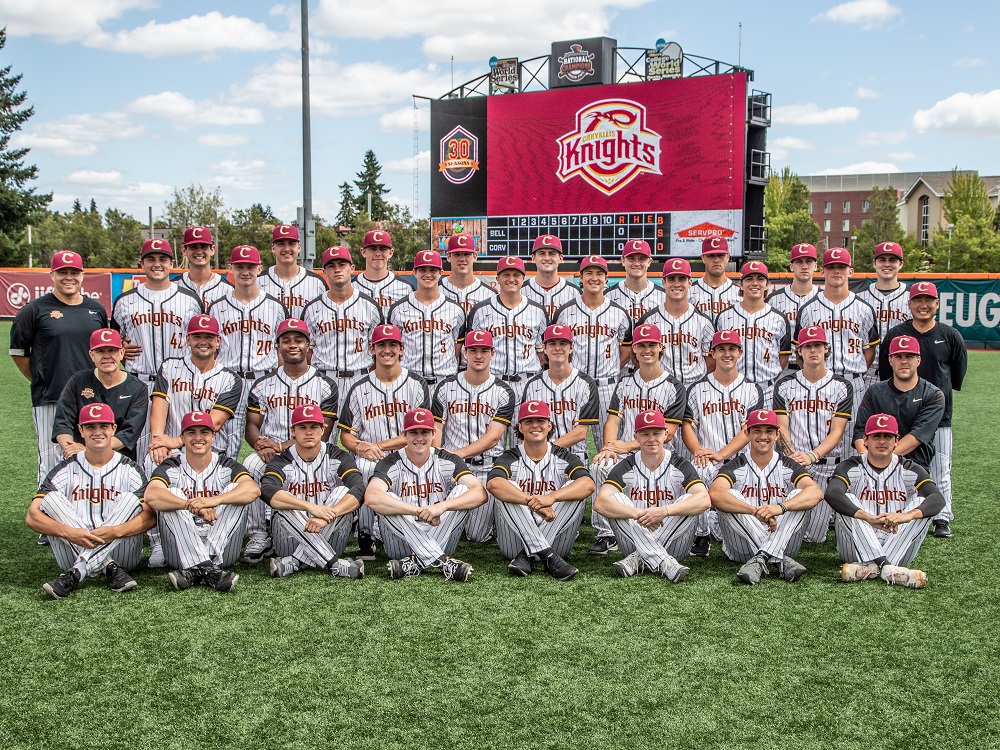 The Corvallis Knights finished the first half of the West Coast League season by winning 15 straight WCL games; sweeping Yakima Valley and Ridgefield twice and the Portland Pickles. Corvallis started the season 0-3, losing three games at Walla Walla, before overtaking the Sweets by going 21-3 the rest of the way.

Several Knights hitters sizzled in the first half including future Cal Poly shortstop Brooks Lee who hit .522 with 4 doubles, 1 homer and 11 RBIs for the week of July 1-7. For the summer, Lee is hitting .434 with 8 doubles, 5 stolen bases, a homer and 14 RBIs.

Redshirt frosh Jake Holcroft of University of Portland is hitting .370 and has swiped 13 bags. Both marks are third best in the WCL. His 40 hits is tied for the lead in the WCL. And he’s second in the league in runs scored with 29 and at bats with 108.

Redshirt senior-to-be utility man Andy Atwood of Texas Rio Grande Valley leads the West Coast League in at bats with 115 and in triples with 4. Atwood is batting .304 with 12 RBIs.

Rising sophomore first baseman Tracye Tammaro of University of Portland leads the WCL in hit-by-pitch with 6 and is second in the league in homers with 4.

Closers Alex Williams of Stanford and Connor Knutson of Portland have been outstanding. Both have not allowed runs, with Knutson registering two saves while Williams has recorded 3 saves over 6 appearances and 8.1 innings pitched while walking no one and striking out 13.

Corvallis opens second-half play tonight at Port Angeles as they take on the Lefties at Civic Field. First pitch is set for 6:35 pm.

The Knights will have homefield advantage during the WCL South Divisional Series with games set for Goss Stadium on August 14 and August 15 (if necessary). This will be the Corvallis Knights 13th straight post-season appearance.

Are you ready for some summer baseball? Well, we've got you covered and much more.…