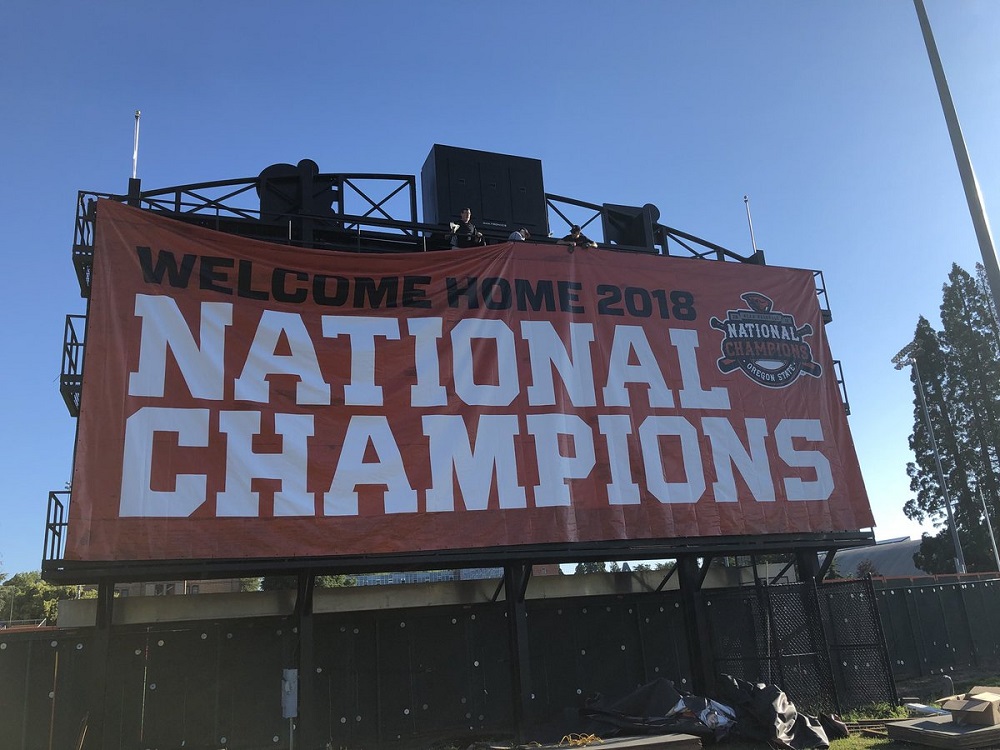 Check out the new signage (pictured, above) on the back of the Goss Stadium scoreboard!

Oregon State’s wonderful accomplishment has led us to postpone tonight’s scheduled game with Walla Walla so the NCAA-champion Oregon State baseball team can host a victory party at Goss Stadium. Come on over this afternoon and join the celebration! Gates will open at 3:30 p.m. and the party will start when the Beavers arrive; their ETA is about 4 p.m. Note

So, the Knights open a key WCL series with South Division co-leader Walla Walla at 6:30 p.m. on Saturday. Daniel Slominski (0-0, 1.92) is the scheduled starter for the Knights; Walla Walla’s probable is undetermined. It will be ZOOperstars! Night, featuring the popular inflatable characters. Snow-cones are $2. Game time is 6:30 p.m.

Friday’s game has been rescheduled for 12:30 p.m. Sunday as the opener of a doubleheader. Tickets for Friday’s game will be honored for both games on Sunday.

The Arizona Diamondbacks recalled alum Jimmie Sherfy (2011) from triple-A Reno on Thursday. He’s back in the majors for the second time this season; he was 0-0 with a 0.00 ERA in two innings over three appearances earlier this season.

Alum Ben (Wetzler) Holmes (2011) was released by the Miami Marlins earlier this week. He played for Jacksonville in the double-A Southern League and for Jupiter in the single-A Florida State League this season.

Wisconsin (A Midwest, Brewers) first baseman KJ Harrison (2015) was 2-for-4 with a double and a run in a 4-1 win over Clinton on Thursday night to earn Corvallis Knights Minor League Player of the Day honors. He played at Oregon State.

That’s all for today. Have a great weekend, remember our revised schedule, and we will see you at the ballpark, and back here on Tuesday.