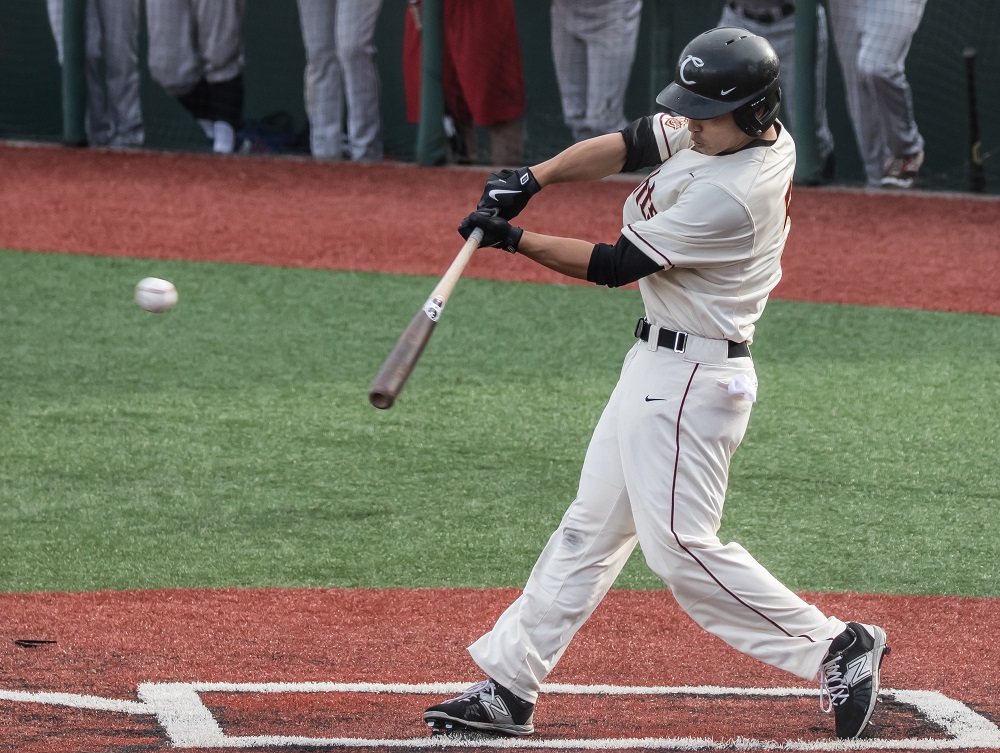 Happy Tuesday everyone, from the worldwide headquarters (WWHQ) of your Corvallis Knights, the 2016 West Coast League champions!

Oregon State sophomore outfielder Stephen Kwan, a 2016 alum, earned Corvallis Regional Most Valuable Player honors on Sunday night after leading the No. 1-ranked Beavers into the Super Regionals. The Beavers defeated Yale 8-1 on Sunday to wrap up the regional title in three games.

We got off to a great start over the weekend by sweeping the Cowlitz Black Bears at David Story Field in Longview in the opening series of the WCL season. Game scores were 4-0, 4-3 and 7-2; we never trailed while improving our all-time record in the series to 31-9.

Our starting pitching was solid and our bullpen was spectacular, as it allowed just one run in 13 innings. Infielder/outfielder Andrew Barrera (Concordia) had three doubles and three RBIs, second baseman Brady Rediger (Linfield) had four hits, four steals, two runs and two RBIs and catcher Jace Duty (Chemeketa CC) had three hits and three RBIs to lead the offense.

We head to Bellingham next, for a Thursday-Saturday series, and then go on to Bend (June 11-13) to conclude our season-opening, nine-game road trip.

Our WCL home opener is at 6:40 p.m. June 14 against the Port Angeles Lefties. That series continues on June 15-16; we then conclude our opening homestand with a rematch with Cowlitz on June 17-19.

It should be an exciting morning at Goss Stadium tomorrow when we host the Portland Sea Dogs on our sixth annual Science, Art and Engineering Day presented by the OSU Colleges of Science and Engineering! We are thrilled to report that SEA Day is sold out for the second consecutive season.

We are anticipating a crowd of more than 3,200 fans, as elementary school students from Corvallis, Albany, Salem, Clatskanie, Monmouth, Central Linn, Philomath, Monroe, Newport, Alsea, Toledo, Eddyville, Eugene, Sweet Home and Silverton are expected to visit Goss Stadium for a day of baseball and science, engineering and the arts.

Representatives from the Oregon State Colleges of Science and Engineering, and of Liberal Arts as well as from OMSI, LBCC, Ashbrooke Independent School and Columbia-Willamette Clean Cities Coalition will be manning interactive exhibits outside and inside the stadium.

Also, at the game tomorrow, Mike Parker and Jon Warren of KEJO 1240 AM (the Beavers and Knights flagship station) will be broadcasting remotely from noon- 1 pm from the Goss Stadium press box during the Knights/Sea Dogs contest. Feel free to listen on the radio or online by clicking here.

Two future members of the 2017 Corvallis Knights shave been named to the North team for the annual Oregon All-Star Baseball Series, to be played June 24-25 at Goss Stadium. The series matches Oregon’s top Class 6A and 5A seniors in a three-game  showdown. Game 1 is Saturday, June 24, at 2:30 p.m., followed by a Sunday, June 25, doubleheader beginning at 10 a.m.

Northern Colorado junior first baseman Evan Johnson of the Wenatchee AppleSox and University of British Columbia first-year pitcher Adam McKillican of the Victoria HarbourCats were selected as the West Coast League Player and Pitcher of the Week for June 1-4.

McKillican made two relief appearances this past week, both 3-inning scoreless stints, and picked up a win and save. The right-hander earned the win in the HarbourCats 11-2 season-opening victory at Port Angeles, and saved Sunday’s 6-2 Victoria win at Yakima Valley.

Reno (AAA Pacific Coast, Diamondbacks) closer Jimmie Sherfy (2011) had two strikeouts in a scoreless inning and recorded his fifth save in a 4-1 win over Las Vegas on Sunday to earn Corvallis Knights Minor League Player of the Day honors. He lowered his ERA to 1.83. Jimmie played at Oregon.

————
That’s it for today. We will see you at the ballpark on Wednesday.