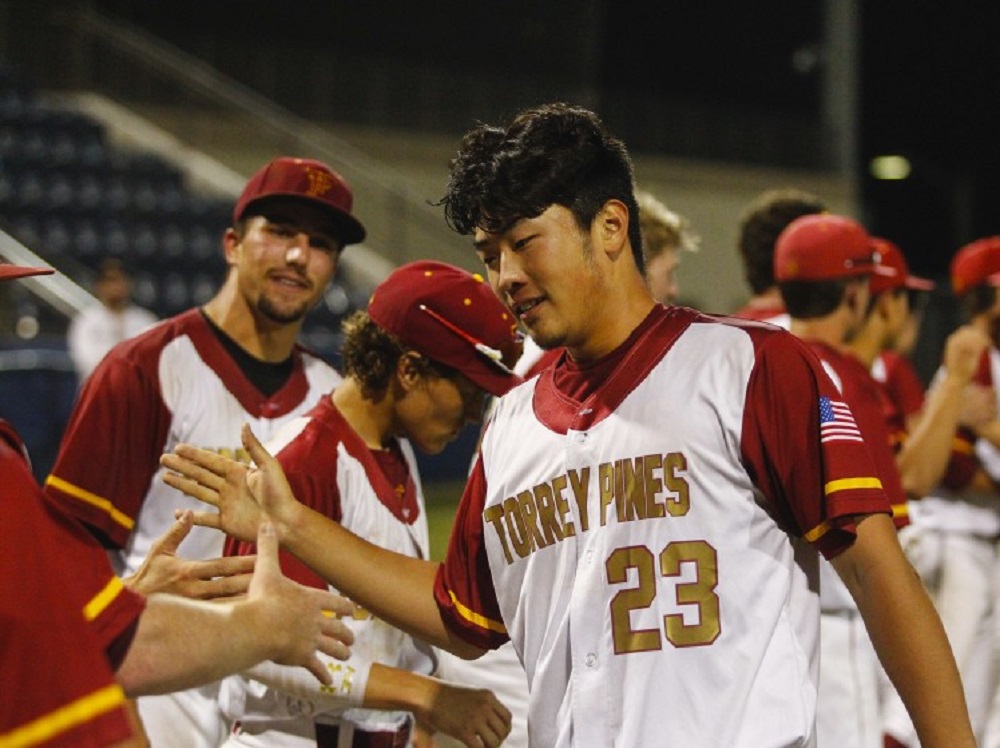 We have signed future University of San Diego third baseman Kevin Sim (pictured, above), a 6-foot-2, 205-pounder from San Diego who is presently a senior at Torrey Pines High School. He throws and bats right-handed.

He was ranked as the No. 48 prospect in the country by Perfect Game. He played in the Perfect Game All-American Classic at Petco Park in San Diego and in the Under Armour All-American Game at Wrigley Field last summer.

His father, Jong-soo Shim, was a standout in the professional Korea Baseball Organization. Nicknamed “Hercules,” Shim hit .287 with 328 home runs and 1,029 RBIs in 15 seasons.

He was invited to spring training by the Seattle Mariners in 2003 and hit .308 (4-13) with a homer and three RBIs. However, players from the KBO must play nine years in that league before they can request free agency and Shim’s petitions for an early release were denied.

After injuries curtailed is pro career, Shim moved his family to the United States was Kevin was seven years old.

Welcome to the Knights, Kevin.

Knights coach Brooke Knight, the manager of the Perth Heat in the Australian Baseball League, has been added to the Boral Team Australia coaching staff for the Feb. 16-18 series against the Doosan Bears of the Korean Baseball Organization. He will coach third base. For more on that story, please click here.

We have also signed an Oregon Duck for the 2020 season. Freshman outfielder Sebastian Orduno will join us in June. He is a 5-foot-11, 195-pounder from San Pedro, Calif., who played at St. John Bosco High School. He bats and throws left-handed.

Orduno missed his senior year of high school with an injury. As a junior, he hit .312, with a 4.55 on-base percentage, and earned first-team Trinity League all-star honors. He also pitched and had a 0.93 ERA and 22 strikeouts in 15 innings.

He hit .326 and was honorable-mention all-league as a sophomore. Orduno was a Perfect Game preseason Underclass All-American High Honorable Mention selection in 2017 and 2018.

Welcome to the Knights, Sebastian.

Alum Chris Rabago (2011-12), a catcher, has been invited to spring training by the Colorado Rockies. Our two-time Joe Segel Award winner spent the 2019 season at double-A Hartford and at triple-A Albuquerque.

Our 2020 schedule has now been finalized. We will open the home season against the Portland Sea Dogs on June 2 on Weyerhaeuser Science, Engineering and Art Day. For the complete schedule, please click here.