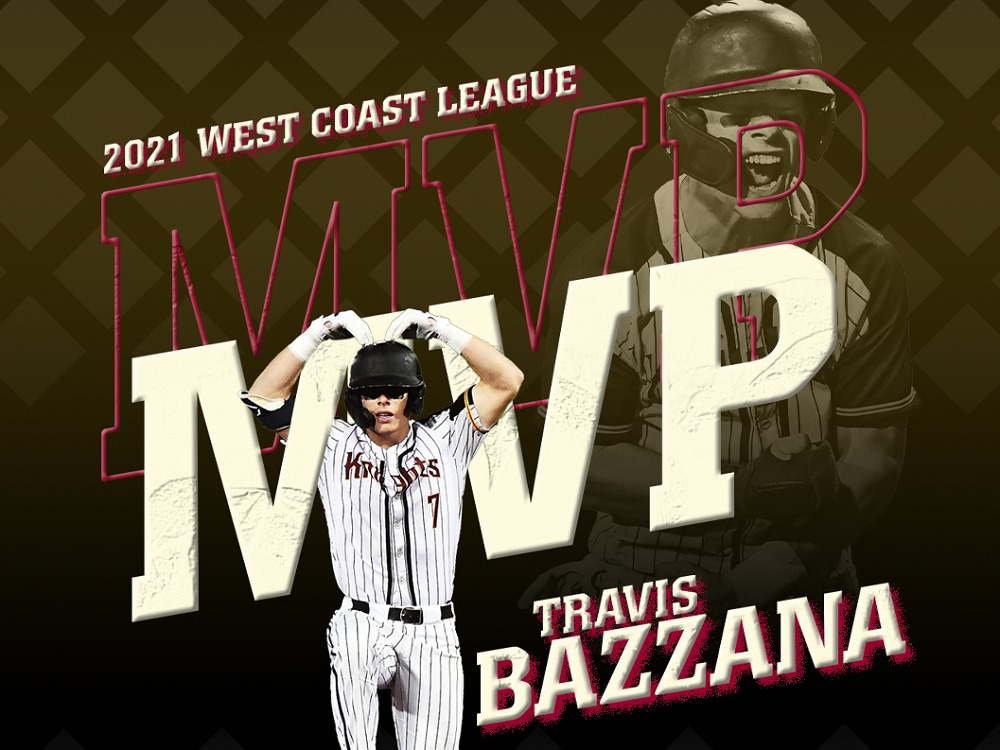 Monday, August 30, Corvallis, Ore. – This morning, the West Coast League announced its Most Valuable Player, Oregon State incoming freshman infielder Travis Bazzana of the Corvallis Knights. The honor is voted on by the league’s coaches.

Bazzana set a new single-season WCL mark for batting average in 2021 as the sweet swinging left-handed hitter from Sydney, Australia hit a remarkable .429 over 189 league at bats.

He also led the West Coast League in runs scored with 46, hits with 81, total bases with 112 and slugging percentage at .593.

“The opportunity to be a Knight made this award possible,” said Bazzana. “The quality of the people around the organization from the top to the bottom allowed me to play with a smile on my face and give 100% every day.”

Counting non-league and post-season games, Travis led the Knights in at bats with 225, runs with 54, hits with 93, doubles with 20 and he batted a team-leading .413, which set a new Knights franchise summer collegiate record.

Defensively, Travis played primarily at second base, but also played shortstop and some outfield. He made several spectacular plays at second throughout the summer and was a terror on the bases swiping 23 bags and collecting 5 triples. The future Beaver also knocked in 33 runs from his lead-off spot in the order.

“Travis is an exceptional baseball player with a very bright future,” said Corvallis Knights skipper Brooke Knight. “We’re thankful we had time with him. His energy was contagious and baseball IQ way above average. He’s going to be a really good player in the Pac-12.”

Travis nearly broke the WCL mark for hits in a season held by former Corvallis Knights outfielder Jake Holcroft of Portland who set the new mark in 2019 with 82 hits in 54 games. Due to Canadian teams opting out in 2021 because of COVID-19 measures, the league schedule was shortened to 48 games this summer.

Bazzana will start his Oregon State playing career in the spring of 2022.