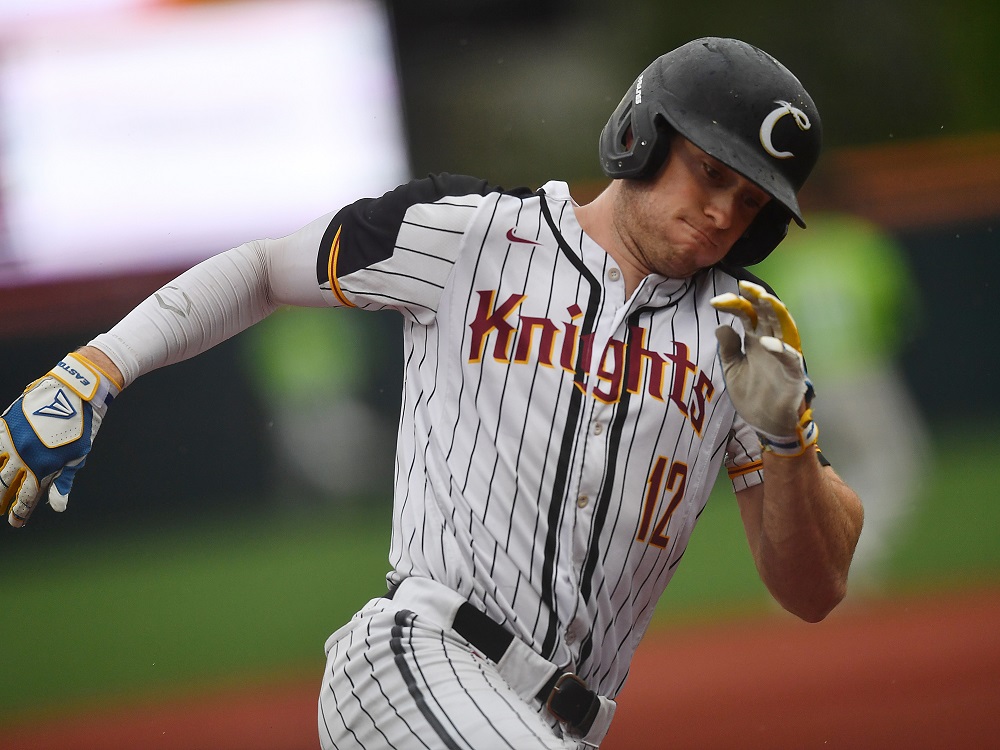 Sunday, June 19, Corvallis, Ore.  – Second baseman Zander Darby (pictured, above) broke a scoreless tie with a two-run single in the sixth inning and Corvallis  held on for a 3-1 West Coast League victory over Yakima Valley before a Father’s Day crowd of 1,318.

It was the ninth consecutive win for the Knights (9-1, 9-0 WCL), who finished off their second series sweep of the Pippins to claim the season series 6-0. Corvallis still has not trailed at any point in the 2022 season and has outscored the opposition 57-13 during the best start in franchise history.

Darby also made several excellent defensive plays, most notably when he leapt to snare a liner in short right field, taking away what appeared to be a sure base hit. Ironically, he borrowed head coach Brooks Knight’s glove lacing kit following Saturday’s game to repair the loosened leather stringing on his mitt.

Reliever Nathan DeSchryver (Gonzaga) bailed out the Knights in the eighth. Entering the game with one out and the bases loaded, he got the second out on a force play at the plate. Left fielder Titus Dumitru’s (LBCC) then made an outstanding, backpedaling catch at the base of the fence to retire the side.

Returnee Ethan Ross (San Jose State), a 2021 all-WCL selection, made his 2022 debut and struck out the side in the ninth on 13 pitches to earn the save.

Starter Joey Gartrell (Portland) went five shutout innings but was not involved in the decision. He allowed two hits, struck out two, did not issue a walk, threw 44 strikes in 62 pitches and faced only 16 hitters, one over the five-inning minimum.

Corvallis starting pitchers have not allowed an earned run in 8 of 9 games and have permitted just two earned runs in 43.2 total innings, an 0.41 ERA. In the last four games, the starters have combined to retire 60 of the 65 batters they faced.

The Knights have Monday off. The homestand continues this Tuesday, Wednesday and Thursday against Walla Walla, and concludes on Friday-Sunday with a set against longtime WCL rival Bellingham.