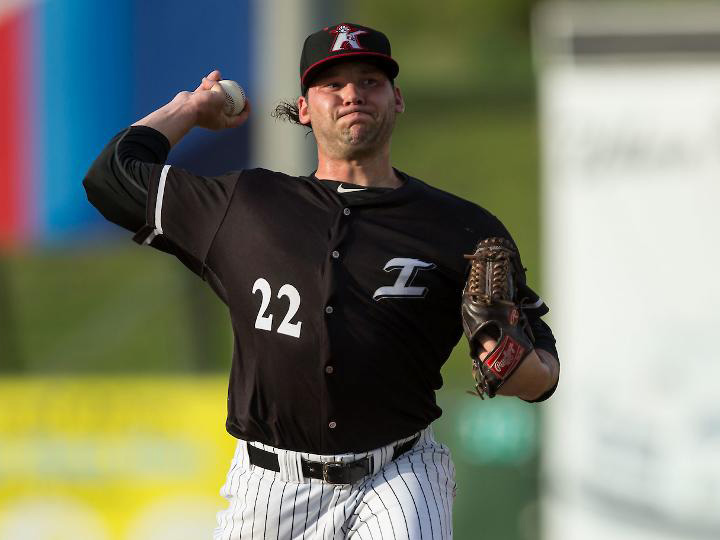 Happy Tuesday everyone, from the worldwide headquarters (WWHQ) of your Corvallis Knights, the 2016 West Coast League champions!

Good news for one of our most popular alums. Right-handed pitcher Max Beatty (2010-12) has been promoted to the Charlotte Knights in the triple-A International League. He earned the victory on Sunday as the Knights edged Buffalo 8-7 in Charlotte.

Max allowed just two hits and no runs in 2.2 innings, and had two strikeouts in his triple-A debut. He was aided by fellow 2010 Knights’ teammate Danny Hayes, who was 2-for-4 with a two-run homer and two runs.

Max had been with the Winston-Salem Dash in the Class A Carolina League. He was 2-4, 4.65 in 10 games as a starter-reliever in Winston-Salem, with 33 strikeouts in 40.2 innings.

Congrats to Max, who originally signed with San Diego in 2013 after a great career at Pacific Lutheran.

Seattle pitcher Sam Gaviglio, a 2009 Knight and a former standout at Oregon State, earned his first major league victory on Monday when the Mariners edged Colorado 6-5 at Coors Field in Denver.

Gaviglio pitched into the sixth inning in his third MLB start and left with a 6-3 lead. Two inherited runners scored but the bullpen then shut the Rockies down the rest of the way to give Sam the decision.

He is now 1-1, 3.50 in four games (three starts), with eight strikeouts in 18 innings. Please click here for more on his big accomplishment.

Time to update the stats (through Monday) of our incoming position players, for the final time this spring. We will update the pitchers for the last time on Thursday.

HENRY CHENEY: The Portland outfielder hit .091 (1-11) in six games, with no homers or RBIs. His season is over.

ELLIOT WILLY: The Oregon State outfielder is redshirting this season.

Greenville (A South Atlantic, Red Sox) reliever Stephen Nogosek (2011) had four strikeouts and allowed just one run over three innings in a 3-2 LOSS TO Rome on Monday to earn Corvallis Knights Minor League Player of the Day honors. However, he was the losing pitcher. He played at Oregon.

There were no honorable mentions.

It will be the first opportunity for fans to get a look at the 2017 AppleSox, who come from 19 different colleges and universities across all three NCAA Division levels and the NAIA. The team will be conducting a two-hour practice, open to spectators.

For more information on that event, please click here.

That is all for today. Have a great week, and will see you again on Thursday.