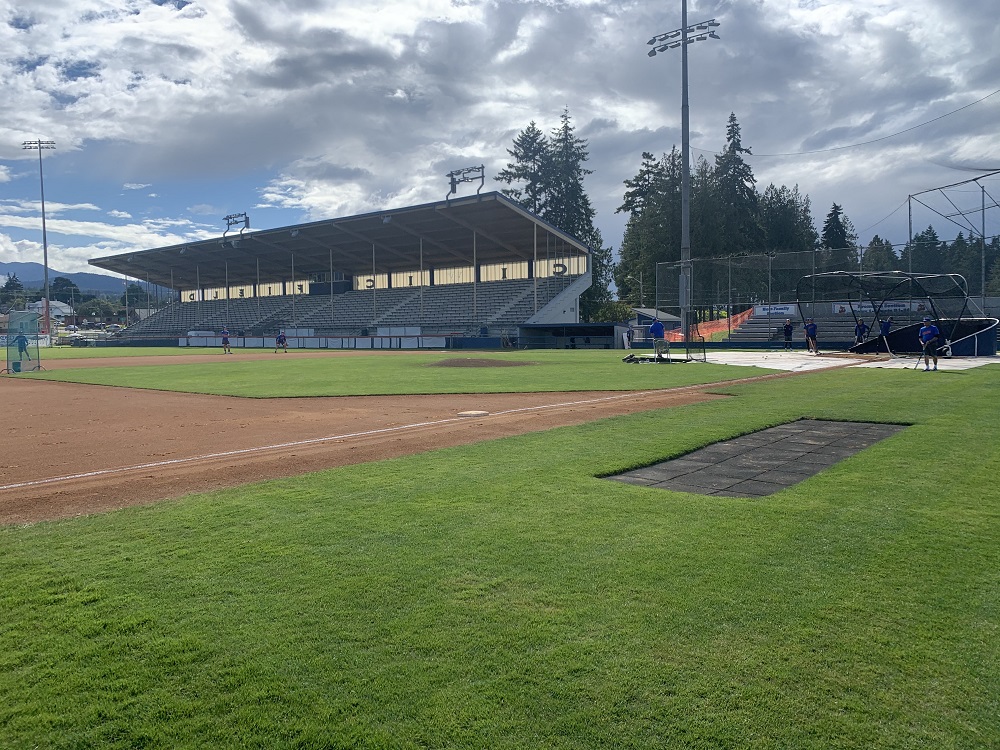 Tuesday, June 8, Port Angeles, Wash. – The Corvallis Knights topped Port Angeles 7-3 to take its first WCL series of the summer and improve its record to 3-2 on the young season. Corvallis used timely hitting and outstanding pitching to beat the Lefties at Civic Field (pictured).

Knights pitchers combined to strike out 17 batters. Freshman Kaleb Kantola of Chemeketa CC debuted by throwing four innings while allowing only 3 hits and one run (a solo homer) while walking 5 and striking out 6. He was relieved by frosh Jake Vargas of Cal State Fullerton who tossed two innings and struck out six. Vargas gave up a two-run homer in the 6th, but earned the win.  Reliever Austin Hallman, a sophomore-to-be at George Fox, threw two perfect innings and struck out 3 and sophomore-to-be Nathaniel Mendoza of Cal State Bernardino closed things out with a scoreless 9th while striking out 2.

Corvallis scored first, plating four runs in the third inning. The big blow was a two-out, two-run homer by frosh slugger Braden Boisvert of Seward County CC. Boisvert is committed to Oregon State and will start his Beaver career in the fall as a COVID sophomore.

The Knights picked up a single run in the fourth on a sac fly by future Beaver infielder Travis Bazzana, a run in the 8th on a RBI single by freshman infielder Jake Hoskins of Linn-Benton CC and Corvallis would add another run in the 9th on a two-out RBI single by junior-to-be center fielder Briley Knight of Portland.

Corvallis collected 7 hits for the game and had three runners thrown out stealing by future UCLA catcher Jack Holman of Port Angeles. Briley Knight drove in two runners and Boisvert had the Knights only multi-hit game with two knocks.

To check out the game box score, click here.

Tuesday, June 22, Portland, Ore. - In a thriller at Portland's Walker Stadium at Lents…